Many people don’t know this but Infiniti is the luxury vehicle division of the popular Japanese auto company, Nissan. This division has been around for the better part of three decades. Over this period, it has introduced several exciting vehicle models into the market.

Infiniti vehicles may not be the most popular on Nigerian roads but you will find a fair number of them. This post will show you some of the most popular Infiniti models in Nigeria and some common features of these vehicles. Let’s get started. 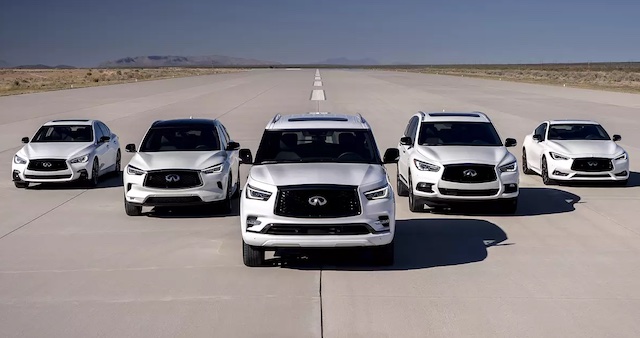 Prices of Infiniti Cars in Nigeria

Some Popular Infiniti Models in Nigeria

Below are some of the most popular Infiniti models in Nigeria:

Infiniti first released the QX50 into the market in 2014 as part of the company’s brand model name overhaul. This model used to be known as EX. The mini-crossover SUV has established itself as one of the top SUVs in its class.

It is no secret that Nigerians love SUVs, especially those with attractive designs. This is probably why this vehicle became an instant hit on Nigerian roads. Infiniti has also worked on the fuel economy, handling, and performance of this vehicle. Because of this, it has become one of the top choices on the market for customers seeking high-performing crossover SUVs.

One of the main factors that attract Nigerians to the QX80 is its large cabin. This vehicle can carry seven passengers comfortably. While this vehicle originally hit the scenes in 2004 as QX56, the company renamed it in 2014.

Infiniti makes yearly updates to this vehicle to make it more comfortable, attractive, and to improve its handling and performance. While this SUV has a very attractive design, experts say its best features are inside. From the comfortable seats to the wide-opening doors and the cabin insulation. No wonder this vehicle is fast-becoming one of the most popular Infiniti models in the country.

The Q50 is a sports sedan from Infiniti. The company released this model in 2014 for the first time as a replacement for the sedans in the G-series. There is so much to love about the Q50. From its elegant and gorgeous looks to the top-tier engine performance and great comfort levels. Little wonder why this vehicle became an instant hit once it was introduced into the Nigerian market.

This car has four trim levels including Luxe, Red Sport 400, Sensory, and Pure. Each trim level is powerful and presents high engine performance and torque figures. While its engine is very powerful, we still consider its elegance and comfort to be the main selling point of this vehicle. Passengers are guaranteed comfort even on long trips and several features are available to aid the driver on the road.

Infiniti is known for its top SUV and sedan models. However, this company smashed the records when it introduced the Q60. This vehicle is somewhat different from what we know Infiniti for as it is a luxury sport coupe. It may have been introduced in 2014, but the story goes way back to the company’s G-coupe model.

This car features the same engine as the Q50 above so you can tell that it is a beast despite its compact size. It also comes with most of the features in the Q50. While this car is quite compact, it offers maximum comfort to passengers, a reason why it thrives on Nigerian roads. We cannot forget to mention its fuel economy and smooth handling as well.

The QX56 is one of the rare examples of a full-size luxury SUV that comes with a truck-based body. It comes in either a four-wheel or rear-wheel drive and its design is based on Nissan’s Armada.

Nigerians love this vehicle because of its versatility. It is great for long trips and meeting towing needs. Other reasons why this car has become so popular on Nigerian roads include the attractive design, high-performing engine, and smooth handling. It also has great off-road properties that make it an amazing bargain.

The G35 was first introduced into the market in 2003 even though it was produced in 2002. Not too long after, this vehicle hit the Nigerian auto market and became a hit within a short while. The G35 is not the most popular sedan on Nigerian roads but it is becoming more common by the day.

There are several reasons why this model is gaining popularity. Some of them include high performance, smooth handling, design, fuel economy, affordability, and comfort. More recent generations of this car have evolved to show how much detail Infiniti put into design and comfort.

Wondering why you should consider buying an Infiniti vehicle? Here are a few unique features of vehicles from this company to convince you:

Infiniti vehicles come with an Intelligent Key feature that provides owners with impeccable convenience. The vehicle detects the proximity of the key as the driver gets closer to the car regardless of where it is. This means that you only need to press the button lodged on the door handle to open the car. You don’t have to insert the key into your car’s ignition as well. Simply press the “Start” button to kick your car’s engine once the keys are inside the car.

Connect the car to its owner

We are in a world that thrives on connectivity. For example, your smartphone connects you to people from all over the world in several ways. Infiniti understands this need and has equipped its latest models with the “Infiniti InTouch System.” You can customize the menu on the infotainment screen with this feature. It allows you to set reminders, call for help, and report car theft among others.

Infiniti pioneered the “Direct Adaptive Steering” technology that allows the driver to choose any of three steering modes based on their situation. This groundbreaking tech comes in handy when you are on a road with rough patches to give the driver better precision.

That’s it for Infiniti cars in Nigeria. This post has shown you the different Infiniti models in Nigeria and their unique features.