This post will show the latest prices of Infiniti QX56 models in Nigeria. It will also reveal the best and worst models of this vehicle along with some other important information. 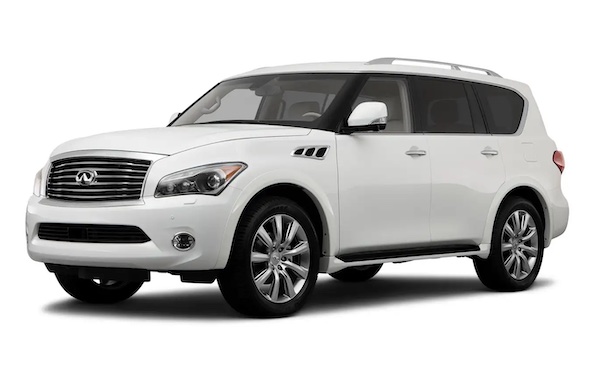 Infiniti renamed the QX56 after releasing the 2013 model. Despite being discontinued, this vehicle is still one of the most revered in its class. It comes with a wide array of features and is known for its high performance and reliability. Infiniti introduced us to different models of this vehicle from when it was first introduced until 2013. Here are the latest prices of the Infiniti QX56 models available in Nigeria:

The Infiniti QX56 is quite reliable even though this vehicle doesn’t score so much in this regard. There are several reasons why this car is still loved to date, despite being discontinued seven years ago. From the responsive road handling to the strong drivetrain and well-furnished interior. Why it scores pretty low on its reliability is because of the cost of maintenance.

It is pretty important that you first find out the best and worst years of a vehicle before you set out to purchase it. Taking this step equips you with sufficient information on what year makes to invest in and which ones to avoid. The best way to find out the best and worst year makes of any vehicle is to check out customer reviews, car expert ratings, and blog articles like this one.

We have done some research on your behalf to find out the best and worst Infiniti QX56 year makes. There haven’t been so many complaints about this vehicle so we will only show you the models with the best testimonies before looking at some common problems with this vehicle.

Here are the best Infiniti QX56 year makes after carrying out lots of research on your behalf:

Most car experts believe that the 2011 Infiniti QX56 is the supreme and most impressive model. Now that we have this information, let’s show you some of the common problems with the Infiniti QX56.

Common Problems of the Infiniti QX56

The Infiniti QX56, especially the 2013 model, has suffered a lot of noise from the timing chain. This part of the vehicle is integral to the working of the engine and shouldn’t be heard over any other sounds from the engine. The challenge is that many drivers have complained that they have heard loud whining, whistling, or hissing sounds as they switched on their vehicles. This sound may last from one to several minutes depending on how bad the issue is. The best way to fix this problem is to replace the timing chain.

Another common challenge with the Infiniti QX56 is the peeling and chipping of the paint. There’s no secret that the paint job of the Infiniti QX56, especially the 2011 model is luxurious and sleek. Sadly, after a while, the paint bubbles, flakes, and peels. The most affected areas are around the roofline, hood, rear tailgate, and close to the windshield.

Faults with the rear power door

One of the main selling points of the Infiniti QX56 is the large cargo space. This is more pronounced in the 2010 model where you can also fold the second and third-row seats. There is a rear power door that allows you to access the cargo space with ease. The challenge is that most drivers complain that after a while, this door stops functioning properly.

Reasons Why You Should Buy the Infiniti QX56

The Infiniti QX56 has grown in popularity in different parts of the world. This vehicle is quite reliable and has great off-road capabilities. Why should you consider buying this vehicle? Here are a few reasons why you should invest in the Infiniti QX56:

The Infiniti QX56, as mentioned earlier, is recognized for its very large cargo space. This means that you can fit in a lot of boxes when next you go on a family trip. Now, you don’t have to worry about the bags and boxes on your next trip.

Another benefit of the Infiniti QX56 is the amazing amount of legroom in this vehicle. This makes it very comfortable for passengers, especially those sitting behind.

The final reason why we think you should consider buying this vehicle is affordability. This vehicle is pretty affordable compared to other vehicles in the same class. It isn’t just affordable to buy, it costs very little to maintain.

There you have it for Infiniti QX56 prices in Nigeria. This post has also shown you the best and worst year makes and reasons why you should buy this vehicle.