Suzuki is a popular brand in Nigeria, but not for cars as one would expect. Most Nigerians know Suzuki to be synonymous with the manufacture of motorbikes. However, the company has a branch dedicated to the design and manufacture of cars that have been around for a long time.

To be honest, Suzuki is not the most popular Japanese vehicle brand, not in Nigeria, or any other part of the world. Regardless, it has some vehicles that are quite popular on Nigerian roads. This post will show you some of the most popular Suzuki models in Nigeria as well as some interesting facts about the company. 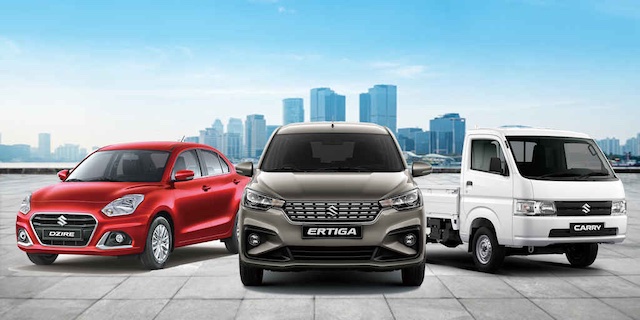 Prices of Suzuki Cars in Nigeria in 2023

Some Popular Suzuki Models in Nigeria

These are some of the most popular Suzuki models on Nigerian roads:

Suzuki first introduced Reno to the world in 2005. This sleek five-door hatchback had a design that was similar to the Matrix from Toyota. It is a compact vehicle that has enjoyed a lot of praise and popularity since its arrival on the scene.

Everything about Suzuki Reno seems appealing. From the tilting steering wheel to the top-notch wheels, and the attractive seat fabric, Suzuki put a lot of work into this vehicle. While it may seem compact, it still has sufficient room to convey five passengers. This vehicle is the true definition of the phrase, “looks can be deceptive.” Nigerians love Reno because it is a low-maintenance vehicle and has amazing fuel economy.

The Grand Vitara from Suzuki hit the market for the first time in 1999. It is an SUV model that offers loads of features. One of the stand-out features of this compact SUV is the powerful V6 engine. The car might look fancy from a distance but it packs a lot of power under the hood.

Over the years, Suzuki has improved the design, handling, performance, and interior design of the Grand Vitara. This vehicle has a lot of ground clearance and the suspensions are pretty solid. Another aspect we love so much about the Vitara is the infotainment system. It is top-notch for a car in its category.

The XL-7 is another mid-size SUV designed and manufactured by Suzuki. This model first hit the streets in 1998, a year ahead of the Grand Vitara. However, Suzuki stopped manufacturing the brand in 2009, a whole two generations after.

Despite being out of production, the XL-7 is still quite popular around the world, including on Nigerian roads. One of the main perks of this vehicle is the extra seating row. The “X” in the name of this model stands for “Xtra Large 7 seater.” Asides from this, the vehicle didn’t perform badly, especially with the handling, transmission, comfort, and engine performance.

The Suzuki Baleno is another compact hatchback from this company. It is regarded by experts as a car in the “Golf” category. The company released the first model as a sedan in 1995 before converting it into a hatchback.

There are several reasons why this car, even though it is no longer in production, is still quite popular. The first is its restrained yet balanced appearance. This vehicle is one of the most unassuming for its class. It delivers more power than one would expect for a car in its category. Another reason why it has gained so much traction is the maximum comfort the four passengers enjoy in transit.

The Alto is also a compact hatchback from Suzuki. It is quite smaller than the previous two hatchbacks from the company on this list. The Alto is the oldest model on our list as it was first released in 1979.

There are two main reasons why Alto has maintained a lot of popularity on the market. The first is its affordability. This vehicle comes at a very low cost and it even costs lower to maintain. The second reason is its fuel economy. If you want a vehicle that doesn’t consume so much fuel but delivers efficiently, then you should look to Suzuki Alto.

The Dzire is the newest model from Suzuki on our list. It was introduced to the market in 2008 in the sedan segment. The company used this model to introduce the world to a new type of sedan, the hatchback-derived sedan.

Some of the features that make this vehicle popular include its excellent handling, high-performing engine, exquisite design, and comfort. It competes favorably with several other sedans in the same class. Don’t let the attractive design of this vehicle fool you, it is still pretty rugged to match Nigerian roads.

Interesting Facts About Suzuki that you Should Know

Now you know about the most popular Suzuki cars in Nigeria. Let’s dedicate this last section to learning a little about the company. Here are some interesting facts you should know about Suzuki:

Suzuki used to be a loom manufacturer

Suzuki’s founder, Michio Suzuki, hails from a small Japanese village. The main income source in this community was weaving and Suzuki designed an automatic loom to improve his mother’s business. Twenty years after this, his company was manufacturing and exporting looms to other countries.

Toyota is a part-owner of Suzuki

Suzuki’s rise to fame shows that the company has huge income potential. Because of this, the company attracted investments from several larger auto manufacturers. It began with General Motors purchasing a 20 percent stake in the company around the late 1990s. Toyota and Volkswagen also own stakes in the company.

Mercedes Benz and BMW are arguably some of the biggest vehicle brands in the world. These companies have given us several iconic models. Interestingly, Suzuki surpasses both companies in production volume. This is largely because it produces vehicles for low and middle-income earners.

That’s it for Suzuki cars in Nigeria. This post has shown you some of the most popular cars from this company in Nigeria. It has also shared some interesting facts about the Suzuki brand.