If you are a lover of beautiful cars, you will love anything from Lamborghini. This company is renowned for manufacturing lovely sports cars. it produces anything from mid-engine to front-engine supercars. Before we go ahead, you must understand that Lamborghini vehicles are very costly. As such, they are only for the affluent in society, especially celebrities and politicians.

From the information above, it is easy to know that Lamborghini cars are not exactly popular in this part of the world. However, we still have a few on Nigerian roads, especially in the big cities. This post will show you some of the most popular Lamborghini cars in Nigeria. 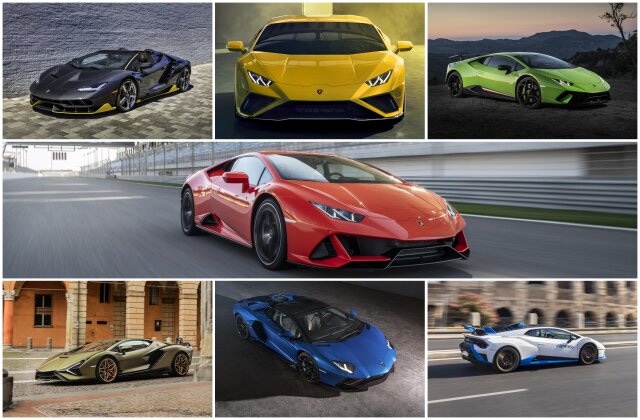 Prices of Lamborghini Cars in Nigeria in 2023

Some Popular Lamborghini Models in Nigeria

Check below for the most popular Lamborghini models on Nigerian roads:

The Urus from Lamborghini is the first super SUV in the world that merges the functionality of an SUV with the spirit of a super sports vehicle. This vehicle is powered by a powerful twin-turbo V8 engine with the ability to produce 850 Nm of torque.

The Lamborghini Urus is arguably one of the fastest SUVs in the world. It accelerates to 62 mph from 0 mph in just 3.6 seconds. The Urus can hit a top speed of 190 mph. It is not just about the speed of this vehicle, it is also a very strong and reliable car. A few celebrities in Nigeria own this vehicle and we are guessing a few others will soon join the train.

Many experts consider the Aventador SVJ as the ultimate Lamborghini roadster. This vehicle comes with a huge V12 engine that provides loads of power for the speed that this vehicle is known for. It also has a spaceship design that will spin heads everywhere it appears.

The Aventador SVJ is a very powerful vehicle but what strikes one more is the complicated aerodynamic devices attached. These devices have a remarkable impact on their lap-time and performance. This vehicle is the first from the company to use the patent “Aerodynamica Lamborghini Attiva” system. The system channels air over, under, through, and around the car’s chassis in a new way. This makes the vehicle one of the fastest cars on the planet.

Lamborghini manufactured the Gallardo to replace the Jalpa that was discontinued in 1988. Despite succeeding in this vehicle, they hardly have anything in common. Experts rate the Gallardo as the highest-selling Lamborghini vehicle of all time.

The company first unveiled the vehicle in 2003 and labeled it the “everyday supercar.” There are several reasons why this vehicle is one of the best sports cars in history. From the V10 engine to the long wheel-base, this vehicle is capable of delivering a blistering performance along with superb handling and ride characteristics. Let’s not forget to mention how comfortable this vehicle is. The Lamborghini Gallardo is worth every dime if you can afford it.

The Huracan is tagged as the replacement for the Gallardo. This vehicle got its name from a Spanish fighting bull and its name means “Hurricane.” Like its predecessor, this vehicle has a V10 engine that comes with a 7-speed dual-clutch gearbox.

The interior of the Huracan resembles a fighter plane. It has a digital screen, 31 inches wide, to replace the analog dials from previous Lamborghini models. The Huracan also comes with several exciting features that make it one of the most attractive sports vehicles around. According to experts, it is a car that brings new levels to the performance of supercars.

The Diablo is another Lamborghini vehicle that is no longer being produced but is still making waves. It was first introduced in 1990 before being discontinued in 2001. During this period, Lamborghini worked on improving the comfort, design, and performance of this vehicle.

The Diablo was one of the fastest vehicles around while it was still being produced. It had a top speed of 200 mph. Lamborghini ensured that the Diablo had great suspensions and was very comfortable inside as well.

The Espada is one of the gems of Lamborghini’s history. This vehicle is one of the vintage Lamborghini’s as it was first released in 1968. It was only in production for just ten years as the company halted its production in 1978. Regardless, it is still worth having and a few people own it in this part of the world.

This rear-wheel-drive compact sedan can seat four passengers comfortably. Throughout its production, Lamborghini continued to improve the comfort and performance of this vehicle. The biggest upgrades were in the braking system and the number of controls in the vehicle. Records have it that the Espada was the last vehicle with front engines by this company before the arrival of the Urus.

Reasons Why You Should Buy a Lamborghini Vehicle

This is probably the biggest reason why anyone would want to own a Lamborghini. Of course, it is not just about the speed, but the different sensors embedded in this vehicle. From the sights to the sound, the smell to the feeling, everything about these cars just excites the driver. Driving a Lamborghini is like eating at a 5-star restaurant.

As we mentioned earlier, only the affluent own Lamborghini vehicles. You can bet that they carry a lot of responsibilities that leave them stressed. Many of them say that they feel relieved after driving their Lambos, even if it is for just a few minutes.

It is normal to be in love with aesthetics. Lamborghinis aren’t just cars, they are art pieces. Each vehicle is carefully sculpted to turn heads every time they speed by. If you are a lover of such beauty, then you should consider owning one of these cars.