Pontiac is an auto brand that used to be owned by General Motors. This vehicle manufacturer has several small-to-full size automobiles, sports cars, and small SUVs in its lineup. What many people don’t know is that General Motors discontinued the Pontiac brand a while ago. This is why you haven’t seen any new products from the company in a while.

Despite being out of production, there are still several Pontiac vehicles plying Nigerian roads. Most of them are quite popular to date. This post will show you the most popular Pontiac cars in Nigeria. 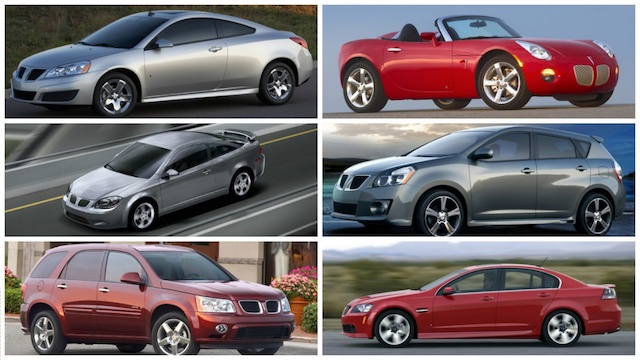 Prices of Pontiac Cars in Nigeria

Some Popular Pontiac Models in Nigeria

Here are some of the most popular Pontiac models in Nigeria:

The Vibe is arguably the most popular Pontiac vehicle in Nigeria. There are several reasons why this vehicle has grown in popularity over the last decade. Some of them include its comfort, interior design, large cargo space, and high-performing engine.

The cargo space seems to be its biggest plus. Collapse the rear seats and this vehicle’s cargo space will compete with what you have in compact SUVs. This vehicle has some other interesting interior features such as the satellite radio, four-speaker stereo, air conditioning, and lots more. The Pontiac Vibe is also pretty affordable both in terms of purchase and maintenance.

The Pontiac Solstice is a compact vehicle that comes in either convertible or coupe style. Experts consider this vehicle’s engine to be underperforming even though it delivers 177 horsepower. The engine comes with either manual or automatic transmission.

One of the main selling points of this vehicle, asides from its attractive design, is the fuel economy. It doesn’t consume so much fuel when compared to other vehicles in the same class. Another major plus of this vehicle is that the base model presents smooth handling around bumps and obstacles. Give or take, it is a great car to own if you need an attractive convertible or coupe to drive around town.

If you are a lover of minivans, then you will like this vehicle. The Montana is a minivan from Pontiac. This full-size front-wheel minivan hit the market first in 1998 even though it was manufactured a year earlier.

The Montana was equipped with a powerful V6 gasoline engine that could accelerate to about 190 km/h. It was also equipped with a 4-speed automatic transmission along with a front suspension that combined a transverse stabilizer, spring-loaded rack, and transverse lever. The main selling point of the Montana in these parts is its spacious cabin. This made it comfortable for large families to move around easily.

The Pontiac Wave is not so popular but it just makes our list. It comes in two body styles, hatchback, and sedan. A third body design that isn’t too common in Nigeria is the Uplevel.

The base trim level doesn’t come with an air conditioning system. Also, there is only manual transmission and an optional Mp3/CD player. Some of the features that come with the base trim include fog lights, floor mats, a tilt wheel, and a rear wiper. The Uplevel trim comes with power windows and locks, heated mirrors, and optional anti-lock brakes.

Experts only love the fact that this vehicle is very affordable. Other than this, it didn’t do so well on the market and was one of the first Pontiacs to be phased out.

The Torrent is a compact SUV from Pontiac. When this vehicle first hit the market, reviewers were quick to judge it as mediocre. However, with time, experts lauded the company for the quality of this vehicle. The engine delivers adequate power for the vehicle to run even though the ride may be a little rough and noisy.

Looking beyond the noise of the engine, one can see a major plus in the spacious cabin. This vehicle is pretty spacious which allows occupants to sit comfortably through long and short rides. It presents plenty of leg- and headroom while the rear seats can recline or slide back and forth as you choose. All of these ensure that the Pontiac Torrent has a lot of cargo space as well.

Another factor that has contributed to the popularity of this vehicle in Nigeria is its ground clearance. Because of this, it is great for navigating bad roads and off-road commuting.

Why did General Motors Discontinue the Pontiac?

As you must have noticed earlier in this post, Pontiac cars are no longer being manufactured. The question that comes to mind is, “Why?”

Pontiac had several fans from around the globe, including in Nigeria. Many of them were saddened when they heard that their beloved auto brand will be discontinued after 2010. It isn’t uncommon to have people wondering why General Motors will make such a decision. After all, Pontiac had been around for 83 years before its discontinuation.

We have dug in to find out the main reasons behind General Motors’ decision. Check them out below:

The company complained that Pontiac had been largely unprofitable in the last few years of the brand’s existence. Already General Motors was experiencing serious financial problems. As such, they needed to let go of any brand that was acting as a liability. At that time, Pontiac happened to be the culprit and needed to be dropped.

That’s it for Pontiac cars in Nigeria. This post has shown you some of the popular Pontiac models in the country. In the last section, we explained the reasons why Pontiac was discontinued.