What comes to mind when you hear the name “Bentley?” If you said luxury car brand, you are very right. Bentley is a British luxury auto manufacturing company. However, it became a subsidiary of Volkswagen in 2001.

This company is renowned for making some of the best luxury vehicles in the world. Of course, you wouldn’t find too many Bentleys in Nigeria because these vehicles are designed for affluent individuals.

Bentley vehicles are quite costly, so the average Nigerian cannot afford to own one. Regardless, we still have some Bentley cars that are quite popular in Nigeria. Continue reading to find out. 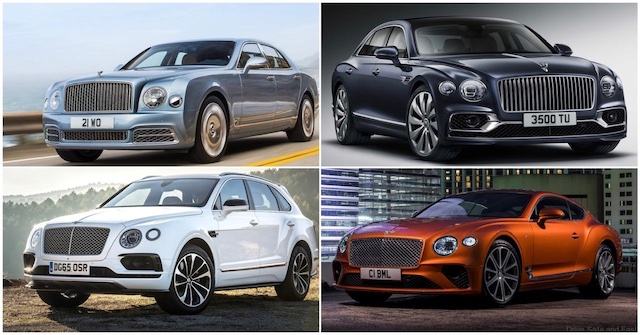 Prices of Bentley Cars in Nigeria

Some Popular Bentley Models in Nigeria

Bentley cars may not be so popular in Nigeria. Notwithstanding, we have combed the market to find out the most popular Bentleys on Nigerian roads.

The Continental from Bentley is arguably one of the most iconic vehicles of the last century. We can trace the story of this car as far back as 1952. It attracted so much attention from all over the world at the time of its introduction into the market.

Today, this car is still popular for several reasons including its iconic and attractive design, speed, and exclusivity. Several models have come out of the Bentley Continental product range with the most popular being the Continental GT.

Bentley has been manufacturing vehicles for over a century. This auto brand has rolled out different luxury product ranges, all in the sedan category. Then came the Bentayga, a breath of “luxury SUV” fresh air.

The Bentayga was named after a Spanish island known as “Roque Bentayga,” the first SUV to be so named. What makes this luxury crossover vehicle so special? It was designed to present efficient engine performance, a higher ride quality, and a very comfortable driving experience. This vehicle combines speed, comfort, and luxury which makes it one of the best SUVs to ever be made. Bentley has created several models from the Bentayga, some of which are available on the Nigerian auto market.

The first Mulsanne hit the auto market in 1980 and what a bang this vehicle made. It epitomizes the class, style, luxury, and elegance that Bentley stands for. No wonder it was an instant hit and has stood the test of time for over four decades.

Experts compared the Mulsanne to the Rolls-Royce Silver Spirit even though they regarded the former as a sportier alternative. Let’s set the records straight, the Mulsanne is not a sports car, however, it seems to have several attributes of one. Bentley ran the production of this vehicle for twelve years then stopped for a while only to begin its manufacture again in 2010.

A few things are common to all the versions of the Mulsanne. They include precision engineering, exquisite finishes and interiors, hand-built production, and a 6.7-liter V8 engine. Even though this vehicle isn’t so popular on Nigerian roads, you can bet it will be a worthwhile bargain in this part of the world.

The Flying Spur is one of the top models from Bentley. This model is synonymous with refinement and taste. Experts refer to this vehicle as having the most complex interior that Bentley has ever crafted in history.

Let’s give you a brief insight into what the interior of a Bentley Flying Spur contains. It features 350 leather panels that are stitched to 60 different interior components by 141 individuals using close to 2 miles of thread. Wondering where all the leather comes from? Bentley is an eco-friendly brand that sources its hide from the by-products of the meat industry in northern Europe.

The Flying Spur is not all looks. This car features a very powerful engine and the steering wheel is designed to give the best driving experience ever. The Bentley Flying Spur is a vehicle that is worth having if you can afford it.

Some Interesting Facts About Bentley

To round up this post, we will look at some interesting facts about Bentley that you should know. Check them out below:

Bentley is one of the oldest vehicle companies in the world. It was established in 1919 by Walter Owen Bentley, a British constructor, and engineer. Walter Bentley also made aircraft and loved to race motorcycles and race cars. Not many vehicle brands that were established around the same time are still around today. As such, we should give kudos to the management of the company for keeping it strong until now.

Fact 2 – The meaning of the Bentley logo

Ever wondered what the big “B” Bentley logo stands for. Bentley’s logo comprises a capital “B” along with two flying wings. Of course, the B means Bentley but what do the wings mean. The wings refer to speed. This logo is a mix of three colors, silver, white, and black. Black depicts elegance and excellence, while silver depicts creativity, perfection, and sophistication. White stands for charm and purity.

Fact 3 – Every Bentley car is built with utmost care

One thing is synonymous with Bentley, class. So much time and effort are put into the construction of Bentley vehicles. For example, it takes about 110 hours to finish one Continental GT while a Bentayga takes about 130 hours. The Mulsanne takes roughly 400 hours to build from start to finish. On average, 26 Continental Flying Spurs, 31 Bentaygas, and 5 Mulsannes are built per day. It takes about 30 engineers and 14 hours to construct a Bentley W12 engine. Finally, close to 5 days are needed to complete the interior of the Mulsanne.

The first SUV to be mass-produced by Bentley is the Bentayga. This 5-door luxury crossover SUV is an all-wheel drive. It comes with a W12 engine that produces about 600 horsepower. The Bentayga can accelerate from 0mph to 60mph in 4 seconds, making it one of the fastest SUVs ever made.

That’s it for Bentley cars in Nigeria. This post has shown you the most popular Bentleys in the country and some interesting facts about Bentley that you should know.