Ferrari is arguably one of the most recognized auto brands in the world. The vehicles from this company are known for their speed, sleek designs, and high-performing engines. More than anything else, it is the rarity of Ferrari cars that strikes the mind. Only 7,000 Ferraris are manufactured every year compared to the over 40 million Corollas alone from Toyota.

One may even wonder if there are Ferrari cars in Nigeria considering their cost and sleekness. Truth be told, there are a few even though they aren’t exactly popular. Regardless, we have searched for the most popular Ferrari models in Nigeria and put them together in this post. We will also discuss what makes Ferraris special. 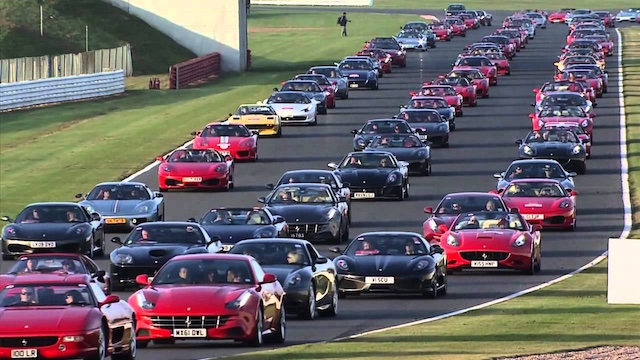 Prices of Ferrari Cars in Nigeria in 2023

Some Popular Ferrari Models in Nigeria

Here are some of the most popular Ferrari models on Nigerian roads:

The Ferrari 599 is officially known as the Ferrari 599 GTB Fiorano and it is a sports car that was produced between 2006 and 2013. This vehicle was designed to replace the 575M Maranello before being succeeded by the Berlinetta in 2013.

What makes the Ferrari 599 special apart from the fact that it is a Ferrari? The first selling point of this car is that it is extremely fast. One may even wonder why you would own such a car in Nigeria considering the state of most of our roads. Other factors that contribute to the popularity of this car include comfort, luxury, and functionality. This vehicle is truly a rare gem and you wouldn’t just stumble on it, except in the affluent parts of the biggest cities.

The F12 Berlinetta was introduced to succeed the 599 in 2012. Three things heralded the arrival of this vehicle. While we thought the 599 was a very fast vehicle, the Berlinetta shattered its records. At the time, it was the fastest Ferrari to have been released into the market. The two other heralding factors include bald acceleration and top-notch handling.

This car is pretty conservative as it comes with only two seats. It also comes with a highly pronounced V-12 engine so you can hear it from a mile away. This vehicle has a smooth aerodynamic shape that contributes to its speed. One of its most notable technologies is the Active Brake Cooling. It is a sports car that will spin heads anywhere it drives through.

Experts regard the Ferrari 488 GTB as one of the most spectacular examples of the company’s workmanship. The company only introduced it in 2015 so it is one of the newest Ferraris on the block. Despite being a young product line, the 488 has gained so much popularity for several reasons.

Each year, Ferrari adds new features to improve the quality of this car. These additions make it faster, more attractive, and comfortable, and improve its general handling. Little wonder, the car has evolved very quickly and become a household name among lovers of superfast cars.

This mid-engine roadster comes with a twin-turbo 3.9-liter V8 engine. The engine can produce up to 760 horsepower, which is quite unheard of for a car in this category. This engine also comes with a 7-speed manual transmission accompanied by computerized technology. Because of this technology, the driver finds switching gears smooth and effective. The Ferrari 488 GTb can hit 60 mph from 0 mph in only 3 seconds, making it one of the fastest cars in the world.

The original name of this vehicle is called Ferrari Four but it was nicknamed Ferrari FF. It got this name because it came with four seats and was a four-wheel drive. Interestingly, it is one of the short-lived Ferrari models.

Despite not being in production for a long time, the FF made a name for itself. The vehicle was produced between 2011 and 2016. It had a 3-door body style accompanying a mid-engine layout. There were only 2,291 pieces produced but somehow, a few made their way across the Nigerian shores. The Ferrari FF is known for its speed, comfort, and super handling.

The Ferrari 458 Italia was first introduced in 2009 before being replaced by the 488 in 2015. Despite being on the market for a short period, only a few cars could come close to it in terms of speed. This vehicle has a V8 engine that produces 562 horsepower. It featured fuel injection and a seven-speed dual-clutch. These factors contributed to the 458 Italia being one of the best sports cars to be produced.

It is not just about the speed, the 458 was also known for its good looks. This vehicle’s unique design is one of the reasons why it is still popular today, despite being out of production for almost a decade.

Exciting Facts about Ferrari Vehicles you Should Know

Here are some interesting facts about Ferraris that you should know:

Ferrari is known for starting motorsports

It is no secret that Ferraris are renowned for manufacturing some of the greatest sports cars ever. What many people don’t know is that Ferrari is the pioneer of motorsports. It began as the Scuderia Ferrari and had the sole purpose of winning races. The founder of Ferrari, Enzo Ferrari, was stirred by racing more than anything else.

Ferrari has one of the most successful racing teams ever

Ferrari has a very rich heritage in all motorsports. The company focuses a lot on racing and development. Because of this, its racing team is one of the most successful in history. Ferrari has scored more points than any other team in Formula One history.

Ferrari has its amusement park

Some of the most popular amusement parks in the world are Disney Land and Universal. If you are a lover of cars, then you should visit Ferrari’s amusement park known as Ferrari World. Not many people know about this place but the company has an amusement park located in Dubai.

That’s it for Ferrari cars in Nigeria. This post has shown you some of the popular Ferraris in Nigeria and some interesting facts about the company that you should know.